The dates I cannot set down with certainty, because, at that time, I did not know how to reckon the years, the months, or even the days of the week. But I think it must have been in the spring of 1916 that the Angel appeared to us for the first time in our Loca do Cabeço.

As I have already written in my account of Jacinta, we climbed the hillside in search of shelter. After having taken our lunch and said our prayers, we began to see, some distance off, above the trees that stretched away towards the east, a light, whiter than snow, in the form of a young man, transparent, and brighter than crystal pierced by the rays of the sun. As he drew nearer, we could distinguish his features more and more clearly. We were surprised, absorbed, and struck dumb with amazement.

On reaching us, he said:

“Do not be afraid. I am the Angel of Peace. Pray with me.” Kneeling on the ground, he bowed down until his forehead touched the earth. Led by a supernatural impulse, we did the same, and repeated the words which we heard him say:

“My God, I believe, I adore, I hope, and I love You! I ask pardon of You for those who do not believe, do not adore, do not hope and do not love You!”

Having repeated these words three times, he rose and said: “Pray thus. The Hearts of Jesus and Mary are attentive to the voice of your supplications.” Then he disappeared.

The supernatural atmosphere which enveloped us was so in- tense, that we were for a long time scarcely aware of our own existence, remaining in the same posture in which he had left us, and continually repeating the same prayer. The presence of God made itself to be felt so intimately and so intensely that we did not even venture to speak to one another. Next day, we were still immersed in this spiritual atmosphere, which only gradually began to disappear.

It did not occur to us to speak about this Apparition, nor did we think of recommending that it be kept secret. The very apparition itself imposed secrecy. It was so intimate, that it was not easy to speak of it at all. The impression it made upon us was all the greater perhaps, in that it was the first such manifestation that we had experienced.

The second apparition must have been at the height of summer, when the heat of the day was so intense that we had to take the sheep home before noon and only let them out again in the early evening.

We went to spend the siesta hours in the shade of the trees which surrounded the well that I have already mentioned several times. Suddenly, we saw the same Angel right beside us. 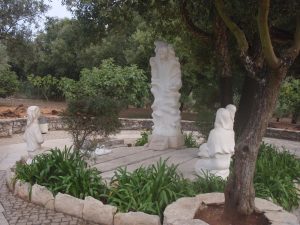 “What are you doing?” he asked. “Pray! Pray very much! The Hearts of Jesus and Mary have designs of mercy on you. Offer prayers and sacrifices constantly to the Most High.”

“How are we to make sacrifices?” I asked.

“Make of everything you can a sacrifice and offer it to God as an act of reparation for the sins by which He is offended, and in supplication for the conversion of sinners. You will thus draw down peace upon your country. I am its Angel Guardian, the Angel of Portugal. Above all, accept and bear with submission, the suffering which the Lord will send you.”

These words were indelibly impressed upon our minds. They were like a light which made us understand who God is how He loves us and desires to be loved, and the value of sacrifice, how pleasing it is to Him and how, on account of it, He grants the grace of conversion to sinners. It was for this reason that we began, from then on, to offer to the Lord all that mortified us, without, however, seeking out other forms of mortification and penance, except that we remained for hours on end with our foreheads touching the ground, repeating the prayer the Angel had taught us.

It seems to me that the third apparition must have been in October, or towards the end of September, as we were no longer returning home for siesta.

As I have already written in my account of Jacinta, we went one day from Pregueira (a small olive grove belonging to my parents) to the Lapa, making our way along the slope of the hill on the side facing Aljustrel and Casa Velha. We said our Rosary there and the prayer the Angel had taught us at the first Apparition.

While we were there, the Angel appeared to us for the third time, holding a Chalice in his hands, with a Host above it from which some drops of blood were falling into the sacred vessel. Leaving the Chalice and the Host suspended in the air, the Angel prostrated on the ground and repeated this prayer three times:

“Most Holy Trinity, Father, Son and Holy Spirit, I adore You profoundly, and I offer You the most precious Body, Blood, Soul and Divinity of Jesus Christ, present in all the tabernacles of the world, in reparation for the outrages, sacrileges and indifference with which He Himself is offended. And, through the infinite merits of His most Sacred Heart, and the Immaculate Heart of Mary, I beg You the conversion of poor sinners.”

Then, rising, he once more took the Chalice and the Host in his hands. He gave the host to me, and to Jacinta and Francisco he gave the contents of the chalice to drink, saying as he did so: “Take and drink the Body and Blood of Jesus Christ, horribly outraged by ungrateful men. Repair their crimes and console your God.”

Once again, he prostrated on the ground and repeated with us three times more, the same prayer “Most Holy Trinity…”, and then disappeared.

Impelled by the power of the supernatural that enveloped us, we imitated all that the Angel had done, prostrating ourselves on the ground as he did and repeating the prayers that he said. The force of the presence of God was so intense that it absorbed us and almost completely annihilated us. It seemed to deprive us even of the use of our bodily senses for a considerable length of time. During those days, we performed all our exterior actions as though guided by that same supernatural being that was impelling us thereto. The peace and happiness which we felt were great, but wholly interior, for our souls were completely immersed in God. The physical exhaustion that came over us was also great.

I do not know why, but the Apparitions of Our Lady produced in us very different effects. We felt the same intimate joy, the same peace and happiness, but instead of physical prostration, an expansive ease of movement; instead of this annihilation in the Divine Presence, a joyful exultation; instead of the difficulty in speaking, we felt a certain communicative enthusiasm. Despite these feelings, however, we felt inspired to be silent, especially concerning certain things.

Whenever I was interrogated, I experienced an interior inspiration which directed me how to answer, without either failing in truth or revealing what should remain hidden for the time being. 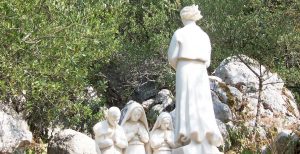 For the conversion of sinners. - RDM