“How did people feel when they were in Jacinta’s presence?” It is not easy to reply, for, ordinarily, I do not know what goes on within other people, and therefore I do not know how they feel. This means that I can only say what I felt myself, and describe any exterior manifestation of other people’s feelings.

What I myself usually felt was much the same as anyone feels in the presence of a holy person who seems to be in continual communication with God.

Jacinta’s demeanor was always serious and reserved, but friendly. All her actions seemed to reflect the presence of God in the way proper to people of mature age and great virtue. I never noticed in her that excessive frivolity or childish enthusiasm for games and pretty things, so typical of small children. (This, of course, was after the Apparitions; before then, she was the personification of enthusiasm and caprice!).

I cannot say that the other children gathered around her as they did around me. This was probably due to the fact that she did not know as many songs or stories with which to teach and amuse them, or perhaps that there was in her some kind of seriousness far beyond her years. If in her presence a child, or even a grown-up, were to say or do anything unseemly, she would reprimand them, saying:

“Don’t do that, for you are offending the Lord our God, and He is already so much offended!”

If, as sometimes happened, the child or adult answered back, and called her a ‘pious Mary’ or a plaster saint, or some other such thing, she would look at them very seriously and walk away without a single word. Perhaps this was one of the reasons why she did not enjoy more popularity. If I was with her, dozens of children would gather round us in no time; but if I went away, she would soon find herself all alone. Yet when I was with her, they seemed to delight in her company. They would hug and kiss her in the affectionate way of innocent children. They loved to sing and play with her, and sometimes begged me to go and look for her when she had not come out to play. If she told them that she did not want to come because they were naughty, they promised to be good if only she would come out:

“Go and get her, and tell her that we promise to be good if she’ll come.”

When I went to visit her during her illness, I often found a large group waiting at the door, hoping to be able to come in with me and see her. They seemed to be held back by a certain sense of respect. Sometimes, before I left, I asked her:

Jacinta, do you want me to tell some of them to stay here with you and keep you company?”

“Oh, yes! But just the ones who are smaller than myself.”

Then they all vied with each other, saying: “I’ll stay! I’ll stay!”

After that, she entertained them by teaching them the Our Father, the Hail Mary, how to make the Sign of the Cross, and to sing. Sitting on her bed or, if she was up, on the floor of the living-room, they played “pebbles”, using crab apples, chest- nuts, sweet acorns, dried figs and so on, all of which my aunt was only too happy to supply, so that her little girl might enjoy the children’s company. 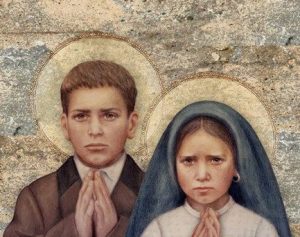 She prayed the Rosary with them, and counseled them not to commit sin, and so avoid offending the Lord our God and going to hell. Some of them spent whole mornings and afternoons with her, and seemed very happy in her company. But once they had left her presence, they did not dare to go back in the trusting way so natural to children. Sometimes they came in search of me, begging me to go in with them, or they waited for me outside the house, or else they waited at the door until my aunt or Jacinta herself invited them in to see her. They seemed to like her and to enjoy her company, but they felt themselves held back by a certain shyness or respect that kept them somewhat at a distance.

Grown-ups also went to visit her. They showed clearly how much they admired her demeanor, which was always the same, always patient, without being in the least demanding or complaining. Whatever the position in which she was lying when her mother left her, this was how she remained. If they asked her whether she felt better, she answered:

There was an air of sadness about her, as she lay silent in the presence of visitors. People stayed sitting by her bedside for long periods at a stretch, and looked as though they felt happy to be there. It was there also that Jacinta had to undergo detailed and exhausting interrogations. She never showed the slightest impatience or repugnance, but merely told me later:

“My head aches so much after listening to all those people! Now that I cannot run away and hide, I offer more of these sacrifices to Our Lord.”

The neighbors sometimes brought along clothes they were making, so that they could sit and sew by her bedside.

“I’ll work a little beside Jacinta,” they would say; “I don’t know what it is about her, but it is good to be with her.”

They brought their little ones along too. The children amused themselves by playing with Jacinta, and their mothers were thus left free to do their sewing. When people asked her questions, she answered in a friendly manner, but briefly. If they said anything which she thought improper, she promptly replied:

“Don’t say that; it offends the Lord our God.”

If they related something unbecoming about their families, she answered:

“Don’t let your children commit sin, or they could go to hell.”

If there were grown-ups involved, she said:

“Tell them not to do that, for it is a sin. They offend the Lord our God, and later they could be damned.”

People who came to visit us from a distance, either out of curiosity or from devotion, seemed to sense something supernatural about Jacinta. At times, when they came to my house to speak to me, they remarked:

“We’ve just been talking to Jacinta and Francisco; when chatting with them we feel that there is something supernatural about them.”

Sometimes, they went so far as to want me to explain why they felt like that. As I did not know, I simply shrugged my shoulders and said nothing. I have often heard people commenting on this.

One day, two priests and a gentleman came to my home. While my mother was opening the door and inviting them to come in and sit down, I climbed into the attic to hide. My mother, after showing them in, left them alone, while she went out into the yard to call me, for she had left me there but a moment before. Not finding me, she delayed a while searching for me. In the meantime, the good gentlemen were discussing the matter:

“We’ll see what this one will tell us.”

“What impressed me,” remarked the gentleman, “was the innocence and sincerity of Jacinta and her brother. If this one does not contradict herself, I’ll believe.”

“I don’t know what it is what I felt in the presence of those two children! It’s as though one feels something supernatural in their presence,” added one of the priests:

“It did good to my soul talking to them.”

My mother did not find me, and the good gentlemen had to resign themselves to taking their departure without having been able to speak to me.

“Sometimes,” my mother told them, “she goes off to play with other children, and nobody can find her.”

“We’re very sorry! We greatly enjoyed talking to the two little ones, and we wanted to talk to your little girl as well; but we shall come back another time.”

One Sunday, my friends from Moita, Maria, Rosa and Ana Gaetano, and Maria and Ana Brogueira, came after Mass to ask my mother to let me go and spend the day with them. Once I received permission, they asked me to bring Jacinta and Francisco along too. I asked my aunt and she agreed, and so all three of us went to Moita.

After dinner, Jacinta was so sleepy that her little head began to nod. Mr. José Alves sent one of his nieces to go and put her to bed. In just a short while, she fell fast asleep. The people of the little hamlet began to gather in order to spend the afternoon with us. They were so anxious to see Jacinta that they peeped in to see if she were awake. They were filled with wonder when they saw that, although in a deep sleep, she had a smile on her lips, the look of an angel, and her little hands joined and rose towards heaven. The room was soon filled with curious people. Everyone wanted to see her, but those inside were in no hurry to come out and make room for the others. Mr. José Alves, his wife and his nieces all said:

“This must be an angel.”

Overcome, as it were, with awe, they remained kneeling beside the bed until, about half-past four, I went to call her, so that we could go and pray the Rosary in the Cova da Iria and then return home. Mr. José Alves’ nieces are the Gaetano girls mentioned above.

While Jacinta seemed to be solely concerned with the one thought of converting sinners and saving souls from going to hell, Francisco appeared to think only of consoling Our Lord and Our Lady, who had seemed to him to be so sad.

At other times, she asked:

“Why doesn’t Our Lady show hell to sinners? If they saw it, they would not sin, so as to avoid going there! You must tell Our Lady to show hell to all the people (referring to those who were in the Cova da Iria at the time of the Apparition). You’ll see how they will be converted.”

These are the last words of Jacinta in her last days re-corded by Sr. Maria Purificacion Godinho:

About the Christian virtues

When saying farewell to Lucia she told her these sentences: